Dino Rosin was born in Venice May 30, 1948. His family moved to the glass making island of Murano when he was just two months old. At the age of twelve he left school and began work as an apprentice at the Barovier and Toso glassworks where he remained until he joined his brothers, Loredano and Mirko, at their factory, Artvet, in 1963.

Dino continued at Artvet until 1975 when he moved to Loredano’s newly established studio as his assistant. There, Dino collaborated with his brother for more than 25 years. He was Loredano’s right hand in the “piazza” and a master in his own right in cold working the glass. In 1988 he was invited to Pilchuck Glass School in Washington to teach solid freehand glass sculpture with Loredano and the American glass artist, William Morris. Unfortunately, in 1992 Loredano met an untimely death in a boating accident. Dino assumed the role of “maestro” and began single-handedly to produce his brother’s old designs and ultimately his own. Examples of his skill at cutting and finishing large glass sculptures have been exhibited throughout the world. His work is done under his own name and has been seen at the Museo dell’Arte Vetraria in Murano, Italy.

His skillful use of “Calcedonia” glass is unique and makes his pieces recognizable and highly collectible. His first personal appearance tour in America was in 1993. He has since made repeated visits to the States, including a stop at Exposures Gallery in November of 2008. His work continually touches admirers, and is coveted for its scale as well as its ever-changing Calcedonia color palette.

CALCEDONIA GLASS
Calcedonia is one of the oldest and rarest types of glass. Calcedonia was first developed in Murano during the mid-fifteenth century. For 500 years, the mystery of creating Calcedonia has fascinated the world. Artifacts made of Calcedonia glass are among the most treasured holdings of many famous museums. The uncertainties and difficulties of Calcedonia glass production were resolved only by the masters of Murano and lost with the fall of the Venetian Republic. The secret of the production of Calcedonia was finally rediscovered by Lorenza Radi in 1856, but lost again by the turn of the 20th century. In 1977, the master Loredano Rosin, working with his brother Dino Rosin, again achieved the miracle of Calcedonia, and used the ancient and
historical glass to create hand made sculpture of modern and romantic design. The Striations of color are achieved by adding about 4 1/2 pounds (1 Kilo) of silver nitrate to each batch of Calcedonia glass. The exact shades and degree of striation can not be controlled and creates the unpredictable beauty of each piece. 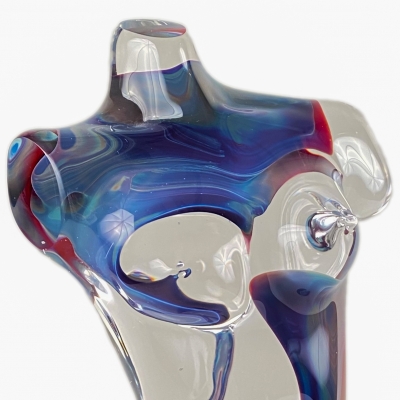