Jo's studio in Paris on the rue Leconte de l'Isle.

Jo Davidson was an American sculptor of Russian-Jewish descent. Although he specialized in realistic, intense portrait busts, Davidson did not require his subjects to formally pose for him; rather, he observed and spoke with them. He worked primarily with clay, while the final products were typically cast in terra-cotta, marble and bronze.

Born in New York City, Davidson worked in the atelier of Hermon Atkins MacNeil before moving to Paris to study sculpture at the Ecole des Beaux-Arts in 1907. After returning to the United States, he was befriended by Gertrude Vanderbilt Whitney, who purchased some of Davidson's work.

In 1911 Davidson secured his first solo gallery shows; in 1934 he won the National Academy of Design's Maynard Prize, and in 1947 the American Academy of Arts and Letters hosted a retrospective featuring nearly 200 of his works. He was one of 250 sculptors who exhibited in the 3rd Sculpture International held at the Philadelphia Museum of Art in the summer of 1949.
Among Davidson's commissions are a design for a United States War Industries badge, a collection of pieces for the Government of France to commemorate the first victory of the Troupes de Marine and bronze busts of the leaders of the Allies. His portraits of world leaders and celebrated personalities gained him international acclaim. 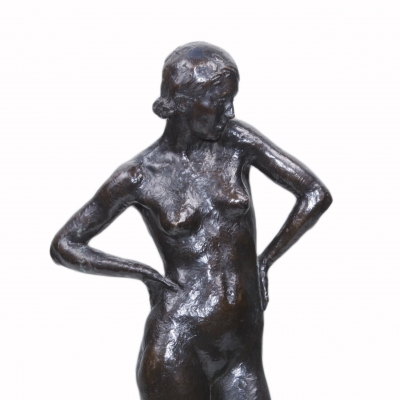