Fire at the Loetz Factory

Johann Loetz was first mentioned as a citizen and glass engraver in Kašperské Hory in 1798. He married well and in 1814 he founded his own glass cutting plant where he employed „many glass cutters“. His business gradually blossomed allowing him to lease the glassworks Zlatá Studna from the city in 1823, which he rebuilt and expanded. In 1826, the existing factors of the glassworks, Josef Schmid Sr. and his son Josef Schmid Jr., became his business partners and the company „Johann Loetz, Schmid & Son“ was created and existed until 1830. At that time Josef Schmid Sr. went to Germany and only Josef Schmid Jr. remained Loetz’s business partner. The men changed the name of the company to „ Loetz & Schmid“ and did business together until 1836. At that time Johann Loetz decided to develop further by leasing glassworks in Annín himself. In 1840, he became formally independent by founding the company „Johann Loetz“. He successfully operated the glassworks in Annín until his death in 1844. At that time the glassworks was already producing richly decorated glass in the Second Rococo style, which won a prize at an industrial exhibition.

When Johann Loetz died, his second and much younger wife Susanne was the heir of this company and was faced with the task of upholding the company in the interest of her four small children. At that time, the lease contract for the glassworks in Annín had expired and therefore Susanne Loetz moved the operations to the Debrník glassworks near Železná Ruda and continued running it under the later prestigious name of „Johann Loetz’s Widow“. The company participated in a rich collection of colored glass as well as in the first world exhibition in London in 1851. Susanne married a lawyer named Franz Gerstner in Debrnik and together bought the glassworks in Klášterský Mlýn near Rejštejn in 1851. This glassworks had been founded in 1836 by Johann Baptist Eisner from the nearby glassworks of Podlesí; after his death Susanne bought it from his son-in-law Martin Emanuel Schmid.

When Susanne Loetz-Gerstner bought Klášterský Mlýn, there were many changes; the most significant of which was the construction of a large glass cutting plant in 1855. Susanne did not run the operations herself; her brother Michael Huska helped her until 1863 followed by her son Anton, who unfortunately died young in 1877. Susanne was faced with the problem of who to pass the prosperous family business to. She decided upon her grandson Maxmilian von Spaun, who acquired the company in 1879.

But its heyday was during the life-time of Max Ritter Von Spaun, grandson of the original Johann Loetz who had founded the company. Von Spaun took over the company in 1879 and ran it until 1908, a year before his death. He was assisted by Eduard Prochaska, his technical specialist, and together they invented, designed and produced a whole series of wonderful new types of glass, taking out several patents and winning awards at all the major world exhibitions during the 1890's and the first years of the new century. The Loetz company were amongst the leaders in Art Nouveau design and expecially in irridescent art glass. "Papillon" glass, which is sometimes known today as "oil spot" glass. Another favorite Loetz coloring was iridized glass with pulled trails called "Phenomenon" glass. There were irridized vases with ribbons of metallic colours winding over the surface, and many spectacular designs with applied trails of beautiful colours, or simply pulled out of the body of the glass to form handles or decoration. About 1900 the company started collaborating with outside designers, and some great artists designed pieces for Loetz, notably Joseph Hofmann, Koloman Moser, Maria Kirchner, and Hofstatter. In 1908 Loetz was taken over by Max Von Spaun's son, also called Max, and although it struggled financially (going through bankruptcy in 1911 and again in 1931) there were several great designers whose work was produced by Loetz during those years and through the art deco period. 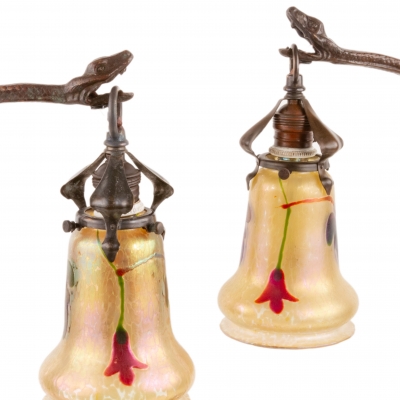 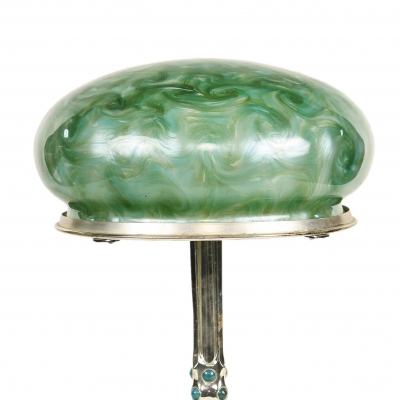 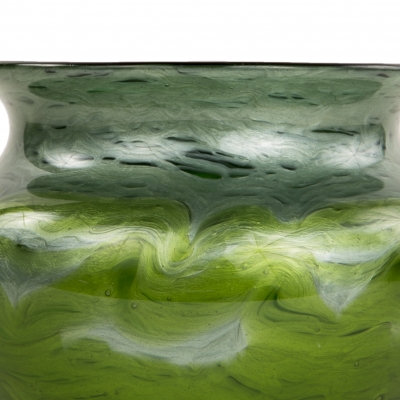