Yaacov Agam was born in Rishon-le-Zion, Palestine (now Israel), in 1928, the son of a rabbi and kabbalist, Yehoshua Gibstein. He studied at the Bezalel Academy in Jerusalem under Mordecai Ardon in 1946, moved to Zurich and then Paris, and studied at the Atelier d'art abstrait and at the Académie de la grande chaumière. While in Zurich, he met and was influenced by artist and teacher Johannes Itten, who was propagating Bauhaus ideas; he also found inspiration in Vasily Kandinsky's defense of abstraction, ber das Geistige in der Kunst. Insbesondere in der Malerei (On the Spiritual in Art: And Painting in Particular, 1911).

His first solo exhibition was at the Galerie Craven in Paris in 1953, entitled Peintures en Mouvement (Paintings in movement), where he showed two series of early work. In one, grids of painted strips that incorporated different designs on opposite sides created images that merged and changed as spectators shifted their viewing position (a type of lenticular print that eventually became known as an Agamograph). In the other, his Transformable Pictures (Images transformables, 1953–61), viewers could manually activate works and rearrange their visual elements. While not the first Optical-Kinetic artist, Agam encouraged spectator participation at a time when such strategies were rare. He exhibited, along with other pioneers of Kinetic art including Alexander Calder and Jean Tinguely, at the Le mouvement (Movement) exhibition at the Galerie Denise René in 1955.

He continued to produce abstract, kinetic work that incorporated light, sound, and viewer participation. He also produced many public commissions, including a moving salon environment at the Elysée Palace in Paris in 1972. In the space, walls were covered with lenticular imagery; transparent doors were included; and a sculpture was placed on a kinetic carpet. In all, the environment shifted according to the viewer's position. In 1979, Agam was asked to make a work of art to commemorate the peacemaking efforts between Anwar el-Sādāt and Prime Minister Menachem Begin at Ben-Gurion University in Beersheba, Israel. He created the Star of Peace, a Kinetic sculpture that appeared from one direction to be the five-pointed star of Islam, from another, the six-pointed Star of David, and from a third, a new star formed from their fusion. Other public projects include a 1987 memorial at the Wailing Wall in Jerusalem for the victims of the Holocaust, and the world's largest menorah: a 32-foot, 4,000-pound structure at Fifth Avenue and 59th street in Manhattan, designed in 1977 and based on the original menorah in Jerusalem's Holy Temple. 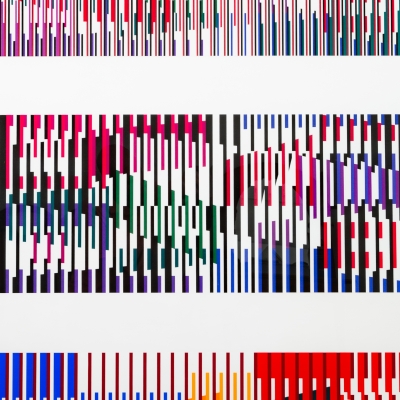